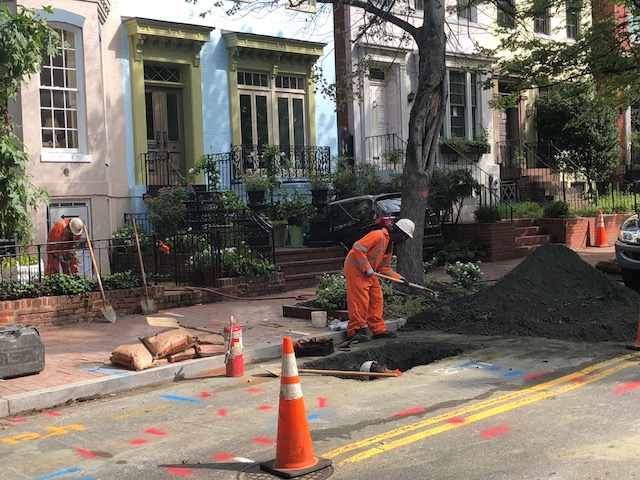 There have been at least 58 natural gas leaks in Georgetown since April 2016, including seven in front of or near my O Street house in the East Village. Last month, there was a record-setting five gas leaks on the same day.

Washington Gas did not inform us about the leaks, such as when and where they occurred, how serious they were, or if and when repairs were completed. The gas company did not tell us because they are not required to under D.C. law.

Thanks to The Current and other news organizations, we are finally receiving information and the public’s attention about this urgent safety issue. Last week, WJLA-TV investigative reporter Steve Taylor was able to get Washington Gas to confirm the number of Georgetown leaks since 2017.

The bad news is there have been more gas leaks in my neighborhood than we knew. Depending on how those leaks were determined, calculated, and reported, and which government agency provided the numbers, the final tally could go higher.

There’s a lot riding on the safety of natural gas pipelines as we saw last month, when deadly and destructive explosions and fires hit three Boston suburbs. Given the age and condition of our pipeline infrastructure, natural gas leaks are likely throughout the city. But unless there is full disclosure and current information about the leaks, we will be in the dark about the seriousness of our situation and threats to our safety.

Public officials have yet to act. But as gas safety expert Bob Ackley recently told our Advisory Neighborhood Commission, “Ignoring these and other gas pipeline-related issues will not make them go away. Although cities, states, and their regulators may have ultimate jurisdiction over these matters, it’s often the smaller neighborhoods and communities and their leaders who speak up and band together that are the true catalysts for improvements and reforms.”

I’ve proposed an action plan to ensure we know about the natural gas leaks and repairs in all D.C. neighborhoods. It includes requiring Washington Gas to share with the public the same information they provide to the D.C. government and an online map that shows the status of leaks and repairs. To read the plan, go to my blog.

Until Washington Gas provides full and daily public disclosure, we cannot have true confidence or peace of mind in what is happening under our streets.

Opinion: Thoughts from the recent “Future of Georgetown” meeting

Housing is a human need, not a privilege