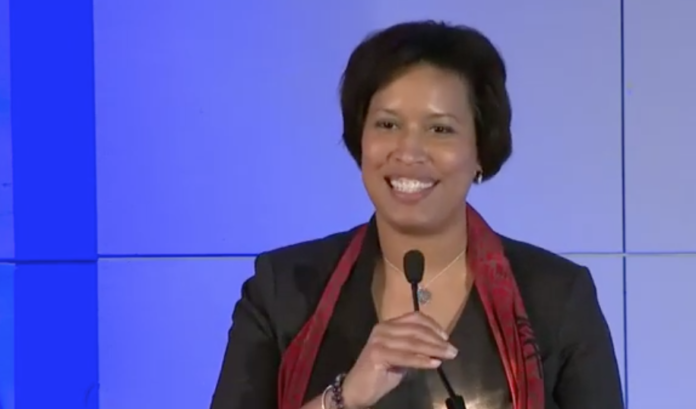 During her Second Term Outlook Address on Tuesday, postponed due to Monday’s snow, Mayor Muriel Bowser announced renewed priorities for her next four years in office as well as a series of organizational changes within the D.C. Government.

“In term two, we’re doubling down on our efforts to make D.C. Government work better for D.C. residents,” Bowser said. “We have some tough challenges ahead, and the decisions we make as a community over the next four years will shape the future of D.C. for years to come. Let’s work together, bring more people to the table, and continue the work of giving every Washingtonian the fair shot they deserve.”

During her address, she outlined priorities and how they fit into the city’s budget, including a focus on homeless services, transportation, the environment, education, and healthcare.  She also spoke about crime, demanding that “we won’t tolerate violence escalating in our city,” alongside a vow to increase the police department’s staffing — foot, bike and Segway officers — to 4,000, up from the current 3,800 sworn officers, over the next four years.

Some of the Mayor’s newly introducing legislation will “support the District’s efforts to build safer, stronger neighborhoods, expand opportunity, and give all residents a fair shot,” including Bowser’s updated Sexual Assault Victim’s Rights Amendment Act of 2019 which builds on her 2017 legislative proposal by incorporating feedback from victims/survivors, advocates, and subject matter experts to strengthen the introduced policies and improve outcomes for victims/survivors of sexual assault; the Ghost Guns Prohibition Amendment Act of 2019, which will prohibit the registration and possession of undetectable (by a metal detector) ghost guns in the District of Columbia; and the Second Chance Amendment Act of 2019, to reform the District’s record sealing process by mandating automatic sealing for non-convictions, shortening the waiting periods before a person is eligible to seal their record, and expanding the eligibility of who can seal their record.

In terms of structural reorganization, the Mayor plans to establish new offices, including the Office for East of the River Coordination, the Office of the Deputy Mayor of Operations and Infrastructure, a Thrive by Five Coordinating Council, Mayor’s Office of Policy, and an office focused on internal services within the Office of the City Administrator.

The Office of East of the River Coordination will be led by an executive director who will report to the City Administrator.  The office was given the charge of elevating the work and progress begun by the Deputy Mayor for Greater Economic Opportunity.

Mayor’s Office of Policy will be responsible for generating “the fresh ideas that allow us to better serve our residents, create forward-thinking change, and support a city that is as innovative as it historic.” This office will be located in the Executive Office of the Mayor.

The Thrive by Five Coordinating Council will be responsible for driving progress on initiatives that improve outcomes for mothers and babies in the District. The Council will be led by and executive director and report to the Deputy Mayor for Health and Human Services.

“We are looking every single day at how D.C. government can be more seamless, easier, more personalized, and deliver services for our residents in more efficient ways,” she said.  “But I’ve got to tell you, on the heels of a 10 inch snowstorm, I’m pretty proud of how D.C. is operating.”

On the Market: A marriage of luxury and livability in Spring…

On the Market: Eclectic colonial that’s full of surprises