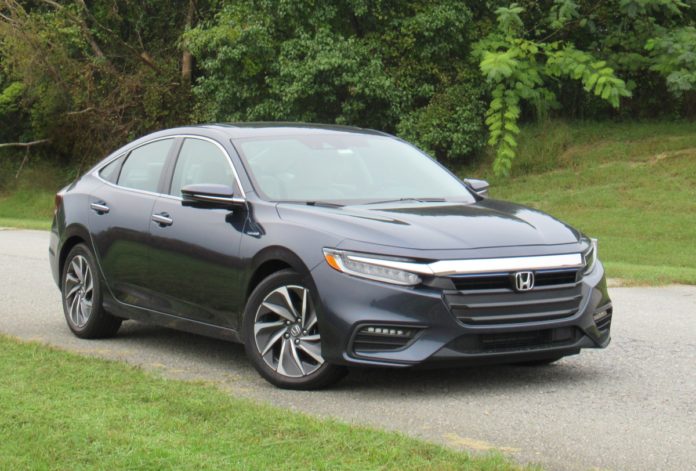 The first hybrid sold in the United States was the 2000 Honda Insight. It backed up its innovative combination of gasoline and electric propulsion with futuristic space-pod styling. But its high price and two-seat capacity set it back against the Toyota Prius that quickly followed it to the market.

A decade later, Honda launched the 2009 Insight, a five-passenger hatchback in the mold of the Prius. But it again fell short of its Toyota rival, which brought more interior room and a more refined driving experience.

Now, Honda is trying again. But the new 2019 Insight isn’t much like the past models that share its name. It’s more like the Civic Hybrid, another early gas-electric model that slowly faded into obscurity against the more eye-catching Prius.

Like the old Civic Hybrid, the 2019 Insight is essentially a Civic sedan with a small electric motor assisting its gasoline engine to reduce fuel consumption. The different name brings different styling inside and out. But don’t expect anything funky like a Prius or past Insight models.

The new Insight smooths out the Civic’s sportier details to create a more luxurious though less exciting design. For a Honda hybrid that embraces unique looks, check out the plug-in Clarity.

Honda took criticisms about the old Insight’s refinement to heart. Like the Civic, the new model is smooth and quiet. And the interior of the tested Touring model is luxuriously upholstered with plush leather. The latest Priuses are also more upscale than before, but the Insight tops them.

The Insight also brings superior smartphone integration to the Prius, with its crisp touchscreen supporting Apple CarPlay and Android Auto. The controls are more user-friendly than the Civic’s, too, though some critics have grumbled about the Insight’s push-button gear selector.

The Prius still wins on fuel economy. Its versions’ EPA ratings range from 52 mpg to 56 mpg in mixed driving, while the Insight ranges from 52 mpg to 48 mpg. That said, the most popular versions of each car tie at 52 mpg. The tested Touring model (the Insight that’s rated at 48 mpg) returned 52 mpg in mixed driving with lots of highway conditions.

Like the Prius, the Insight can accelerate gently off the line using purely its electric motor and burning no gasoline. That’s an important advantage in city driving compared to the other hybrid economy car on the market, the Hyundai Ioniq. The Insight’s mileage plummets faster than the other two on the highway, though, where observed fuel economy during the test (in the low 40s) is about the same as a gas-powered Civic.

All three are more fun to drive than you’d likely expect from a hybrid, with responsive handling that was absent from early Priuses. But the Insight’s steering isn’t as sharp as the Civic’s. And its gasoline engine drones unhappily if you accelerate hard.

The Insight’s biggest difference from the Prius and Ioniq is that it’s a sedan rather than a five-door hatchback. That means the other two have more cargo volume and can better handle bulky items. Still, the Insight has a roomy trunk for a compact sedan at 15 cubic feet.

The 2019 Insight starts at $23,725, well-equipped with a generous suite of advanced safety features. That undercuts the Prius’s sticker price and is competitive with the Ioniq. That said, factoring in bigger discounts available on the Prius and the Ioniq’s extra-cost safety features, pricing comes out as something of a wash among these three models.

Overall, the Insight stands out for providing polished refinement along with its excellent fuel economy. The Prius, meanwhile, offers the best real-world city fuel economy and the roomiest interior, while the Ioniq splits the difference between the Prius’ utility and the Insight’s refinement and user-friendly controls.

If you want to see more photos of the tested 2019 Honda Insight, you can visit Brady Holt’s Facebook page. Brady Holt writes weekly car reviews, too.

On Autos: New Lexus hybrid is a city-friendly crossover