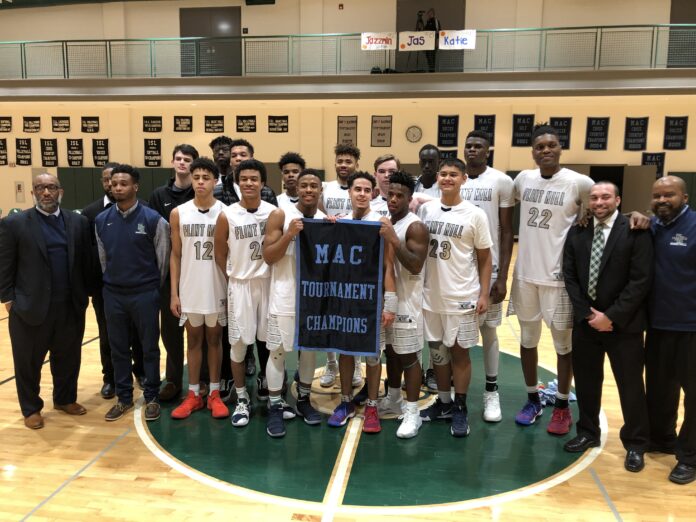 On February 24th, the Sidwell Friends Quakers (21-7) were defeated by the Flint Hill Huskies (26-3), 63-47 in the Mid-Atlantic Athletic Conference (MAC) championship game. The game was played on a neutral site at Georgetown Day School and it was a physical one for majority of the contest.

In the first quarter, Flint Hill started off with a driving layup by Ethan Jones. Then Chris Gamble scored for Sidwell Friends on a baseline jumper. The Quakers’ star had a highlight reel by going down the court, rolling the ball behind his back and making the layup. Jordan Hairston made the Huskies first three pointer of the game. Qudus Wahab of Flint Hill blocked a layup by Gibson, but got called for a foul… and Gibson got called for a technical foul for taunting.

Later on, Wahab would have a bucket, a foul, and complete a three point play. He would then miss a shot in the paint but follow it up with a putback. Christian Turner made a corner three to extend the Huskies lead to 12, which led to the Quakers calling a timeout. Ronald Ayers made a layup for Flint Hill off the baseline inbound pass. Dean Mazlish made the Quakers’ first three pointer from the corner. However, the Quakers led 22-11 after a physical first quarter.

In the following period, Qudus Wahab started off with a hook shot made in the paint. Ethan Jones airballed a three pointer when the shot clock buzzer sounded, which led to a violation. Jack Lewis made a corner three off a pass by Dean Mazlish. Jordan Hairston made a foul line jump shot for the Huskies. Chris Gamble made only one of two free throws after being fouled on the shot fake.

Jason Gibson made a corner three for the Quakers. He would make another three to cut the deficit to seven, which led to the Huskies calling a timeout to stop some momentum. The Quakers were playing some full court press to put pressure on Flint Hill. Jordan Hairston made a three for the Huskies to stop the Quakers scoring run. Justice Ellison would make a layup near the halftime buzzer to bring Flint Hill to a 37-27 lead at intermission. 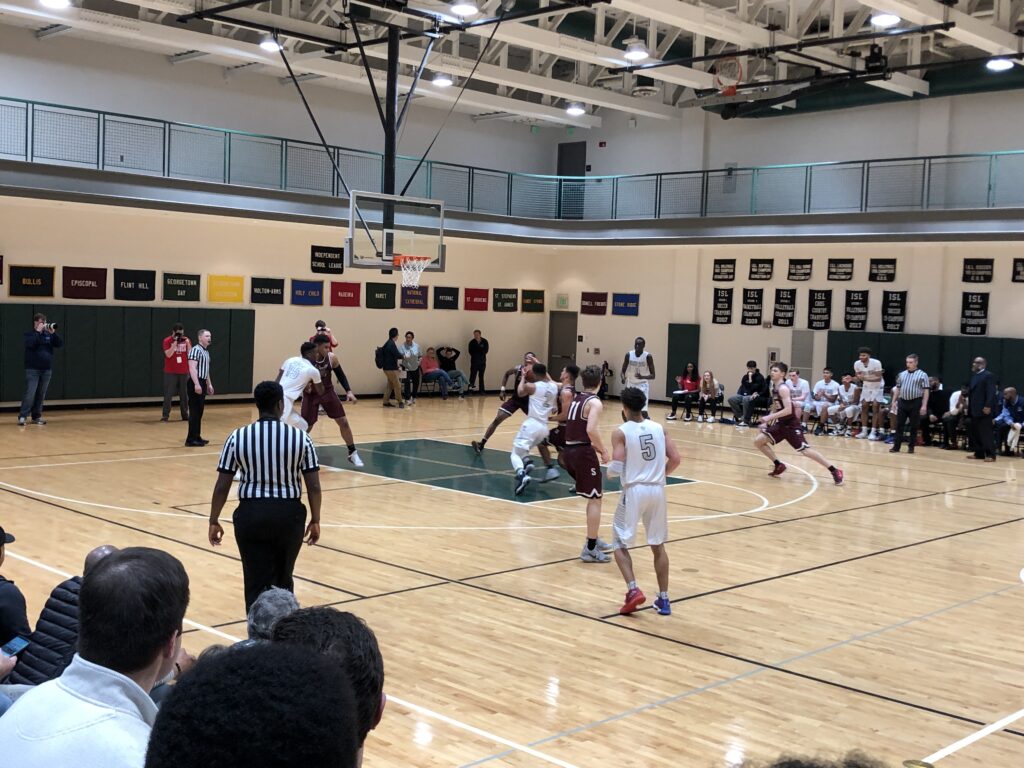 When the second half began, Chris Gamble was fouled while putting back a Jason Gibson missed layup and made both free throws. Jason Hairston made an off-balanced shot for Flint Hill. Qudus Wahab made a turnaround shot for the Huskies. Jason Gibson made a three off of the pick set by Walter Rouse to cut the Quakers deficit to five.

Jordan Hairston made a three pointer for the Huskies which led to a timeout. He would make another three to put Flint Hill back up by double digits. Ethan Jones made a layup by cutting to the basket off a pass by Noel Brown for Flint Hill. Jason Gibson missed a layup for Sidwell Friends in which it looked like a goaltend. The Huskies would keep their lead after three quarters 51-41.

In the fourth period, Justice Ellison had a nice pass to Dowar Jioklow as he finished with a layup for the Huskies. Later on, Jioklow made both of his free throws after being fouled in the paint. Jordan Hairston made two free throws giving the Huskies their largest lead of 16 points. The commanding lead allowed Flint Hill to eat some clock.

When Jason Gibson made a jumper for the Quakers, the Huskies answered with a basket by Qudus Wahab. Gibson would get called for a 10 second violation for not bringing the ball in the frontcourt on time. Ethan Jones responded with a driving layup to put the game away for the Huskies.

“I think we were confident. What we have to do is we have to play the way that we’re comfortable playing. We have an opportunity to find advantages with our size and when we were poised and focused on our sets, we can be pretty effective,” said Flint Hill head coach Rico Reed.

Jordan Hairston led Flint Hill in scoring with 18 points and Qudus Wahab and Ethan Jones each had 12 apiece. Jason Gibson was the only player in double figures for Sidwell Friends with 20 points.

“Flint Hill is just an unbelievable team. They present so many challenges for you with their size, their ability to dump it in there, said Sidwell Friends head coach Eric Singletary. “They force you to double team, and we thought the game plan went well at times, when we got them to turn the ball over. But often they made the right pass out of it. Wahab is such a force down low and I think we didn’t put enough game pressure on them by making more shots.”

Luckily for the Quakers, they will have another chance as they will be playing on Wednesday February 27th in the DCSAA Boys Class AA Tournament. They will host the winner of the McKinley Tech vs Dunbar first round match of the tournament on February 26th.