Gabriel Kahane—Book of Travelers: 8980 (part of DIRECT CURRENT): The singer-songwriter performs his new song cycle with an evocative video backdrop, drawing on the conversations and stories Kahane gathered on an 8,980-mile trip just after the 2016 election. 7:30 p.m in the Kennedy Center Terrace Theater, 2700 F St NW. Tickets $45.  http://www.kennedy-center.org

The ice sheets in Greenland and Antarctica, along with glaciers and ice caps around the world, are melting faster than anticipated as a result of climate change caused by greenhouse gases from human activities. In this talk, Dr. Eric Rignot will cover how and why the ice sheets are melting and what we can do about it. Practical solutions exist that are economically viable and ethically desirable, including transforming our energy production system and developing scalable carbon sequestration strategies. At stake is whether the world will be irreversibly committed to a multiple meter rise in sea level with potentially catastrophic consequences. 7:00 p.m. at National Academy of Sciences Building, 2101 Constitution Ave., N.W.  Free. https://www.eventbrite.com/e/public-lecture-sea-level-rise-and-what-we-should-do-about-it-tickets-57722834552?aff=ebdssbdestsearch

Bill T. Jones/Arnie Zane Company: Analogy Trilogy (part of DIRECT CURRENT). A true pillar of modern dance, Bill T. Jones/Arnie Zane Company makes a triumphant return to the Kennedy Center with three separate evening-length works that delve into the voice of the marginalized in our society. Based on an oral history that Jones conducted with his mother-in-law, a French Jewish nurse and social worker, the work tells her story of survival during World War II. 8 p.m. Kennedy Center’s Eisenhower Theater, 2700 F St NW. Tickets: $29–79.  http://www.kennedy-center.org

Richard Rothstein: The Color of Law and the role of government.  In this groundbreaking history of the modern American metropolis, Professor Rothstein explores the myth that America’s cities came to be racially divided as the result of individual prejudices, personal choices to live in same-race neighborhoods, income differences, or the actions of private institutions such as banks. Instead, The Color of Law uncovers a forgotten history of how racially explicit policies of federal, state, and local governments created patterns of residential segregation that persist to this day.11:30 a.m. – 2:00 p.m. at Women’s National Democratic Club, 1526 New Hampshire Ave NW.  Tickets (include lunch) $15 – 30. https://democraticwoman.org/richard-rothstein/

Join artists Tom Ashcraft and Max Hirshfeld and Art in Embassies Curator Sarah Tanguy to explore collaboration, cultural diplomacy and “Du Quotidien,” an in-progress commission for the new U.S. Embassy complex in Niamey, Niger. “Du Quotidien” is an ethno-photographic and socially engaged artwork of portraits and scanned personal objects from students in the Studies in Arts and Cultures Program, Université Abdou Moumouni Niamey, Niger and the School of Art and Design, Western Carolina University, Cullowhee, North Carolina where Ashcraft is Distinguished Professor of Art. Structured within a three-year art and research course he created, the commissioned project includes concept research, design development, proposal presentation, fabrication overseeing, and final installation, in tandem with the special considerations of a diplomatic context. 6:00 p.m. at Hemphill, 1515 14th St NW.  Free, though seating is limited and available on a first-come first-served basis..

Cellist Amanda Gookin takes a major step forward in her mission to make classical music an active force for political good with her Forward Music Project inside Dupont Underground.  Praised for “Gookin’s focus and ferocity—coupled with expert technical work” (The Strad), Forward Music Project is part of DIRECT CURRENT’s initiative to take Kennedy Center artists and programming out into the world beyond the traditional concert hall. 9:00 p.m. at Dupont Underground, 19 Dupont Cir NW. Tickets $20. www.kennedy-center.org

At the 8th annual Pursuit 3×3 Basketball Tournament Pursuit Stream, a cutting edge platform to teach athletes, student-athletes and youth about financial education and management will be launched.  The 3×3 tournament is a fun, community event that promotes financial education and health and wellness. In years past, special guest players and spectators have attended, including Arne Duncan Max Pearce, and Susan Rice. Various times at Sidwell Friends, 3825 Wisconsin Ave NW.  https://pursuitbball.com/

Witness the unforgettable jazz musician Byron Stripling’s electrifying performance in Sounds of New Orleans: A Tribute to Louis Armstrong, a pops concert with the National Philharmonic, led by Maestro Piotr Gajewski.  Stripling got his start as the lead trumpeter in the Count Basie Orchestra and will perform Armstrong’s greatest hits, including his signature version of When the Saints Go Marchin’ In. Stripling will perform other Armstrong hits, including Saint Louis Blues, Statchmo Scattin’ & Swingin’, and What a Wonderful World. 8:00 p.m. at The Music Center at Strathmore’s Concert Hall, 5301 Tuckerman Lane, North Bethesda. Tickets $20-$89. http://www.nationalphilharmonic.org

The Washington Men’s Camerata, led by music director Frank Albinder, presents “On the Road Again! with the Washington Men’s Camerata,” a celebration of music from the US and around the world.  From the Vaughan Williams Songs of Travel to the music of Willie Nelson, this vibrant and varied concert is not one to miss.  4:00 p.m. at The Church of the Epiphany, 1317 G St., NW. Tickets $25.  www.camerata.com 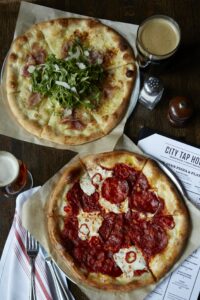 In celebration of Women’s History Month, City Tap Dupont invites guests to a Bad & Boozy Brunch. Brunchers are invited to raise a glass in honor of the phenomenal women of the world with bottles of bubbly and mixers for build-your-own mimosas ($20), as well as the usual $18 bottomless mimosas, beermosas, and build-your-own bloody marys. DJ Ducky Dynamo will have powerful female artists playing throughout the restaurant for guests to dance and sing along with while enjoying brunch favorites such as strawberry sundae pancakes, shrimp & grits, and woodfired pizzas. 11:00 a.m. to 3:00 p.m. https://www.citytap.com/location/dupont/.

Kinga Augustyn is a Polish-born and New York City-based versatile classical concert violinist and recording artist gaining worldwide recognition through her performances as a concerto soloist, recitalist and chamber musician. Her repertoire ranges from early baroque, which she sometimes performs on a baroque violin, to modern, oftentimes written especially for her. She is known for unique programming of unaccompanied solo violin recitals. 5:00 at The Kosciuszko Foundation, 2025 O Street, NW. Tickets $30. RSVP: [email protected]

From the housing projects of Berlin, to the mountains of Kyrgyzstan, with foray through the streets of Bucharest, the 2019 edition of the annual Zeitgeist Literature Festival brings you the best in contemporary German-language literature. Join the Goethe-Institut Washington, the Austrian Cultural Forum, and the Embassy of Switzerland in welcoming three leading German-language novelists to the nation’s capital – where they will present their latest work in a reading and conversation with three prominent local writers. This year’s overarching theme, “The New Nostalgia,“ highlights compelling new works by Stefanie de Velasco from Germany (Tigermilch / Tiger Milk), Daniela Emminger from Austria (Kafka mit Flügeln / Kafka with Wings), and Dana Grigorcea from Switzerland (Das primäre Gefühl der Schuldlosigkeit /An Instinctive Feeling of Innocence) that explore self-discovery, memory, multicultural identity and friendship, and the relationships between past and present. The writers will be joined on stage by prominent Washington, D.C. authors E. Ethelbert Miller, Melissa Scholes Young, and Josh Weinerfor discussion and reading (in English). 6:30 – 8:30 p.m. at La Pop Cultural Salon, 1847 Columbia Road NW.  Free. https://www.eventbrite.com/e/reading-dialogue-w-stefanie-de-velasco-daniela-emminger-dana-grigorcea-tickets-57553960445?aff=ebdssbdestsearch

During a time of inquisition and slavery, Sierva María wants to know what kisses taste like. She is 13 years old, daughter of aristocrats but raised by their African slaves living in colonial Cartagena de Indias. When a rabid dog bites her, the bishop declares she is possessed and entrusts Cayetano, his pupil, with her exorcism. The priest and the girl find themselves seduced by a demon more powerful than faith and reason. With an intimate, personal narrative and a visual language reminiscent of Renaissance paintings, Of Love and Other Demons is based on one of Gabriel García Márquez`s (Nobel Literatura Prize 1982) most harrowing love stories. 6:30 -9:30 p.m. at Former Residence of the Ambassadors of Spain, 2801 16th St NW,

The Events DC Embassy Chef Challenge is an annual gathering of embassy chefs from around the world, coming together to showcase the unique flavors of their home countries. The friendly, culinary competition will feature an expected 30+ chefs in 2019, creating a truly global, immersive foodie experience only possible in Washington, DC.  5:30 p.m. at Ronald Reagan Building and International Trade Center Atrium and Atrium Hall, 1300 Pennsylvania Ave NW. Tickets $75. embassychefchallenge.com

The John F. Kennedy Center for the Performing Arts and Composer in Residence Mason Bates continue the 2018–2019 season of their immersive new-music series, KC Jukebox, with the renowned male a cappella group Chanticleer. Bates composed the 12-part a cappella work, Sirens, for Chanticleer in 2009 and noted “this cycle casts a wide net in exploring seduction music.” Separated into five movements, the text is based on Book XII of the Odyssey, poems by Heinrich Heine and Pietro Aretino, and a sacred prayer of the Quechua Indians in South America. Sirens explores the notion that sirens are not only a sign of danger, but perhaps a symbol of purity and harmony. 7:30 p.m. at Kennedy Center, 2700 F St NW.  Tickets $39+ http://www.kennedy-center.org

Celebrate with the Women’s National Democratic Club as we bestow two distinct awards: Congresswoman Maxine Waters will receive the Democratic Woman of the Year Award; Rep. Waters has been instrumental in shaping public policy on issues ranging from housing and infrastructure to jobs and youth training to international peace and justice. Students from Parkland (Marjory Stoneman Douglas HS) will receive the Trailblazer Award to recognize their classmates’ ability to turn tragedy into action to end gun violence. 7:00 p.m. at Women’s National Democratic Club, 1526 New Hampshire Ave NW. Tickets $150+ https://democraticwoman.org/awards2019/

FLOC ‘helps children caught in quicksand to get on solid ground’